FEBRUARY 2020 FORECAST FOR THE 12 ANIMAL SIGNS

Rejoice because the beginning of the lunar new year, the early days of February will be luminous, happy, and full of motivation. The Rat (2020) is the first sign of the animal zodiac, so aside from the new year, 2020 is the beginning of a new cycle. We have been given a chance to start fresh and clean. Rat 2020’s gift is the creative energy - this is a good type of energy since it has the ability to make us manifest our intentions and fulfill our wishes.

In 2020, anything is possible, and will depend more on our choices, the path we take, rather than our destiny.

May we all shine this February 2020! Love and light! 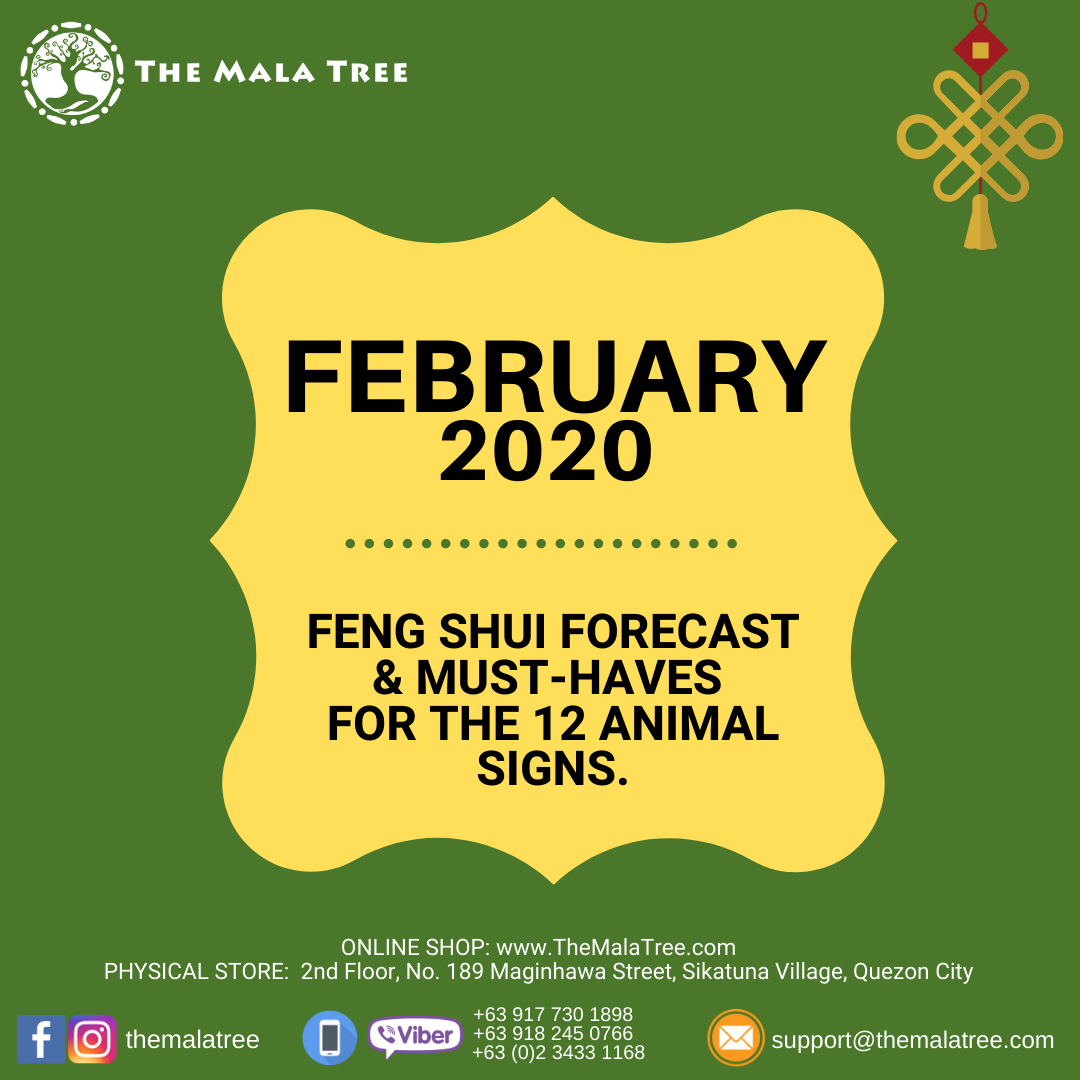 Rats will enter the new lunar year at odds with fortune. Despite the pressure to push yourself in work. Take it easy. Otherwise, especially for middle-aged folks, things will take a toll to your health. This in turn, if things get worse, will have a significant impact on your wealth fortune. You may need to get hospitalized due to illness. 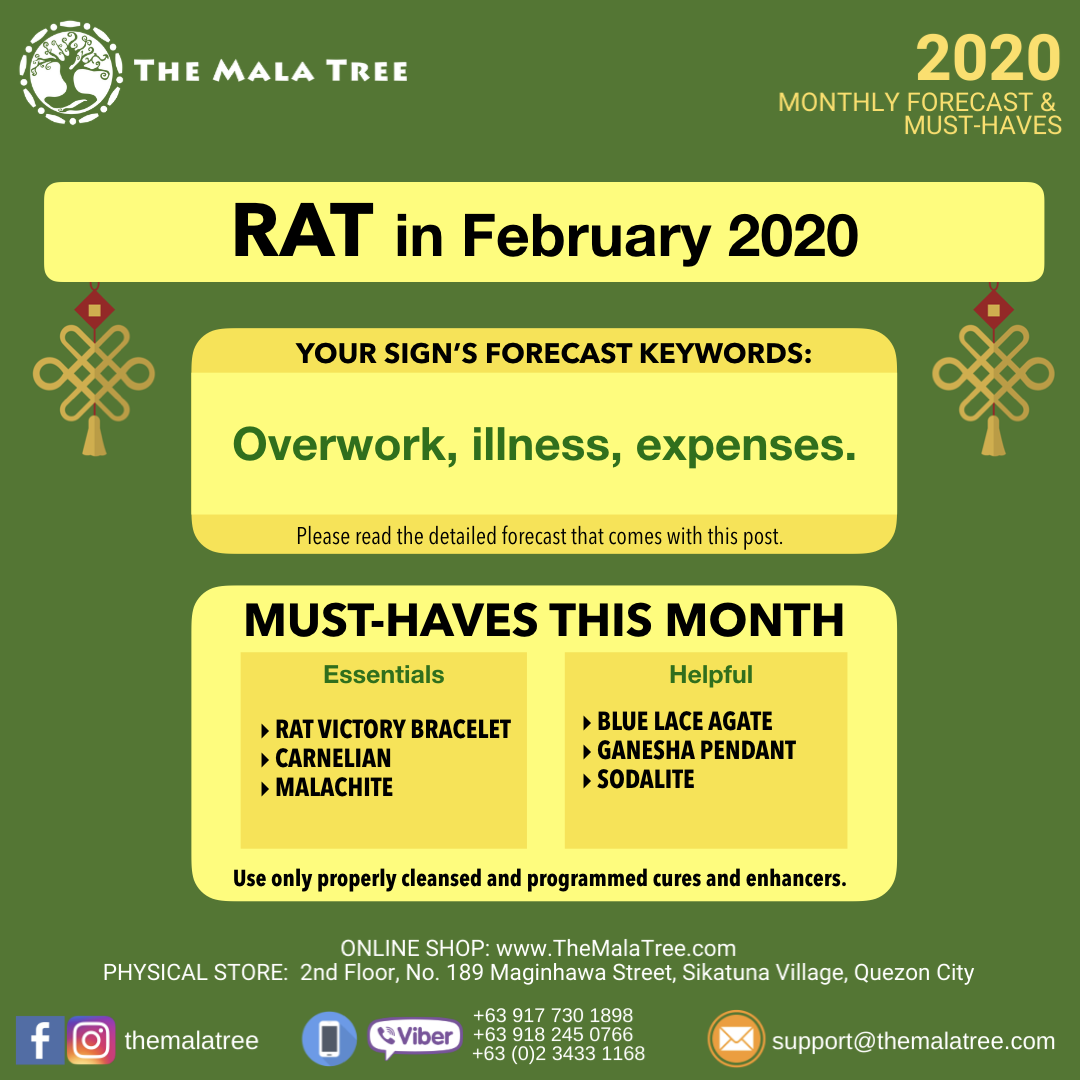 Fortune this month will help you go where you want to be. Your path will be clear. Take this opportunity for development. However, be wary of bad intentions. Keep it cool and keep things lie low. Avoid getting into disputes that way you can avoid saying hurtful words. Love is rosy but also could be troublesome. You charms will be up but be wary of getting involved in a love triangle. Be careful with your actions as you will be prone to injuries. 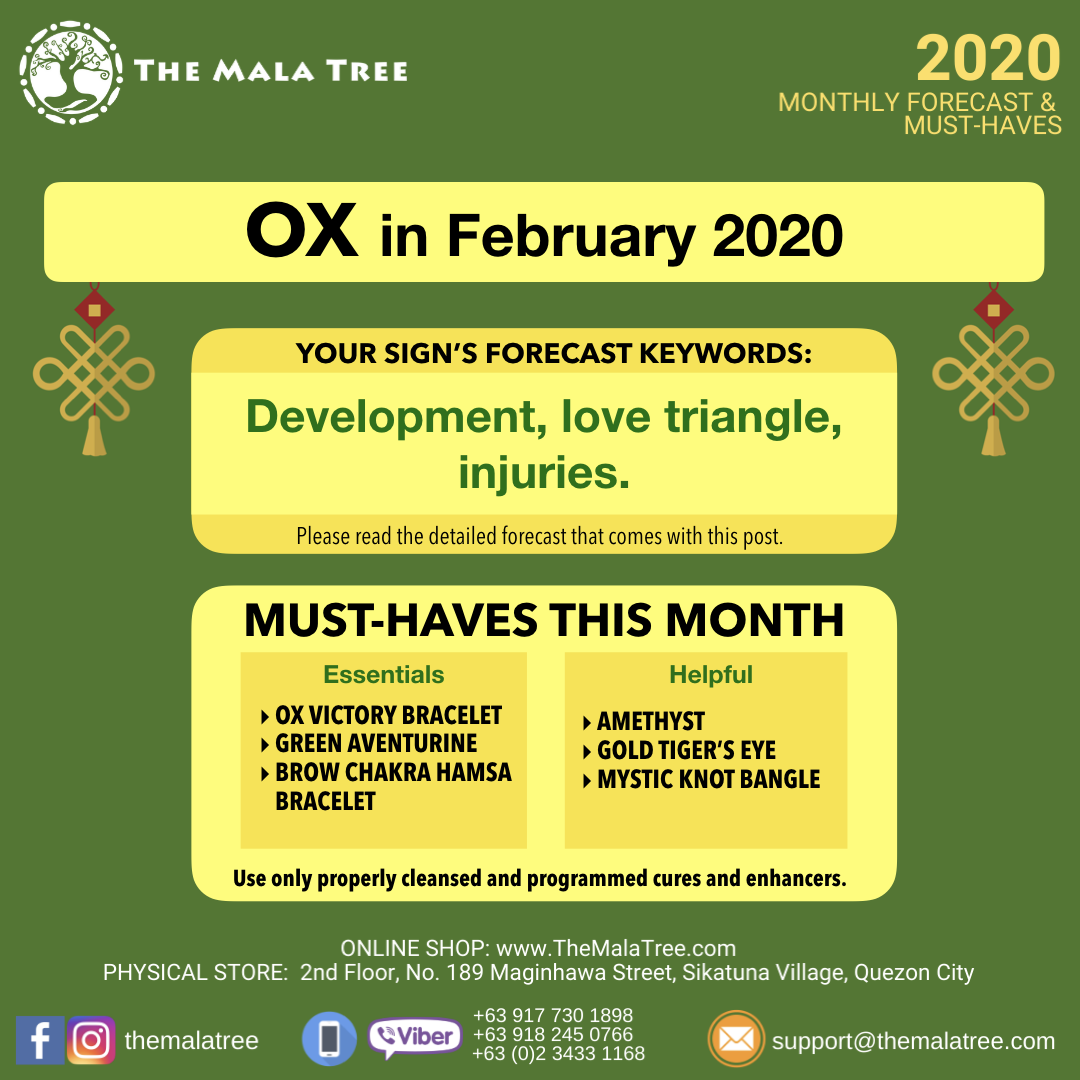 It’s a good time to move forward in terms of career. But take things easy and quiet. Avoid being pompous and test the waters before taking a step. Money will be good but avoid making investments for the time being. It is best for you to avoid getting overworked. Get the rest you need and be on the alert on any possible health issues. 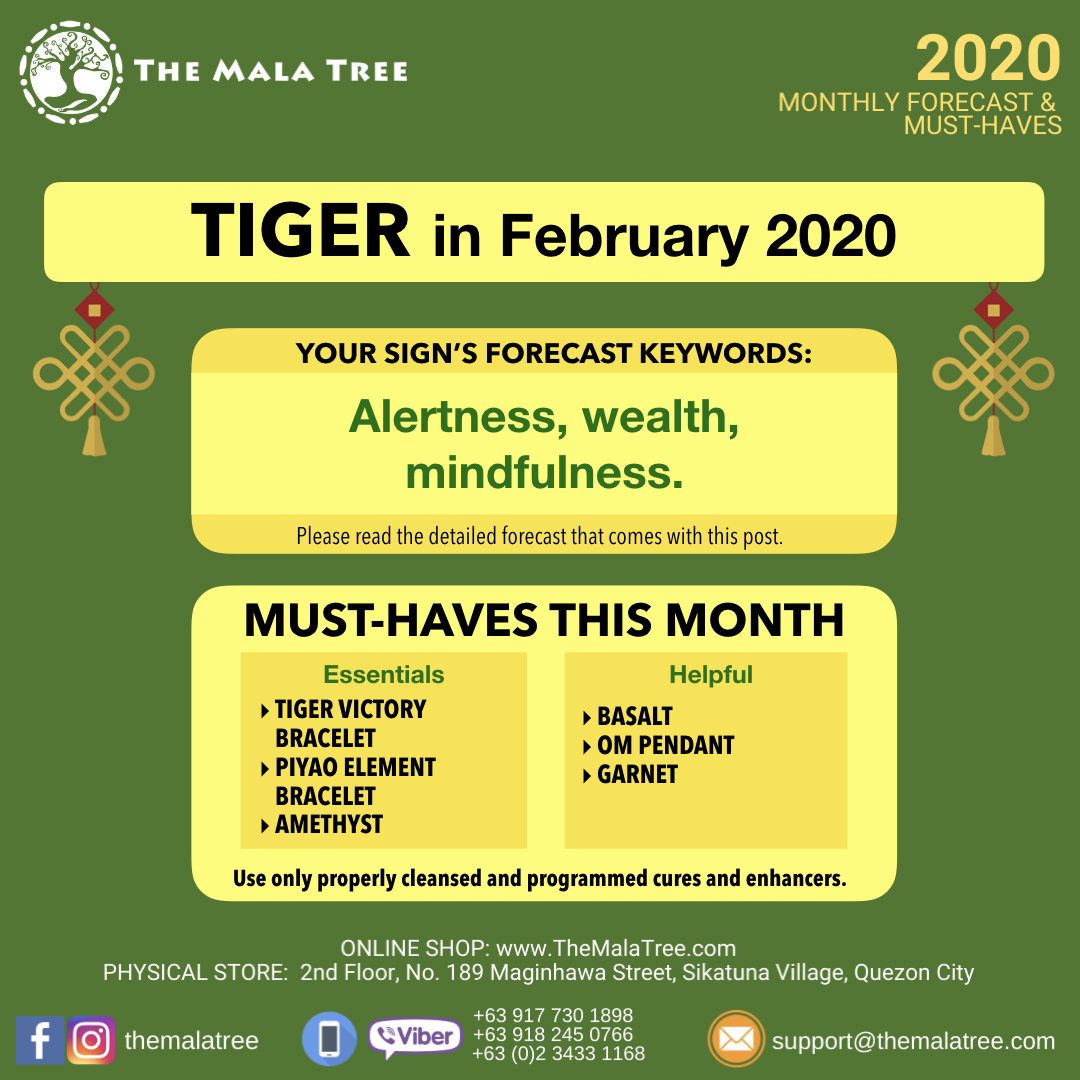 Rabbits will be very blessed this month of February. You are most especially lucky in love and health. Windfall and income will be generous but as always it is never helps to be greedy. Ride on the opportunities that may come career-wise and it will bring you success. However, be careful of bad intentions. Keep quiet while working and avoid getting into misunderstandings.

Good things will come the Dragon’s way this month. However, it is also a time where you will be prone to mistakes. Do things with utter diligence. Manage your affairs with attentiveness. Income will be good. It is also a great time for investments. It also a good time for singles to establish an intimate relationship. As for the married ones, it is a time of temptation, of infidelity in particular. 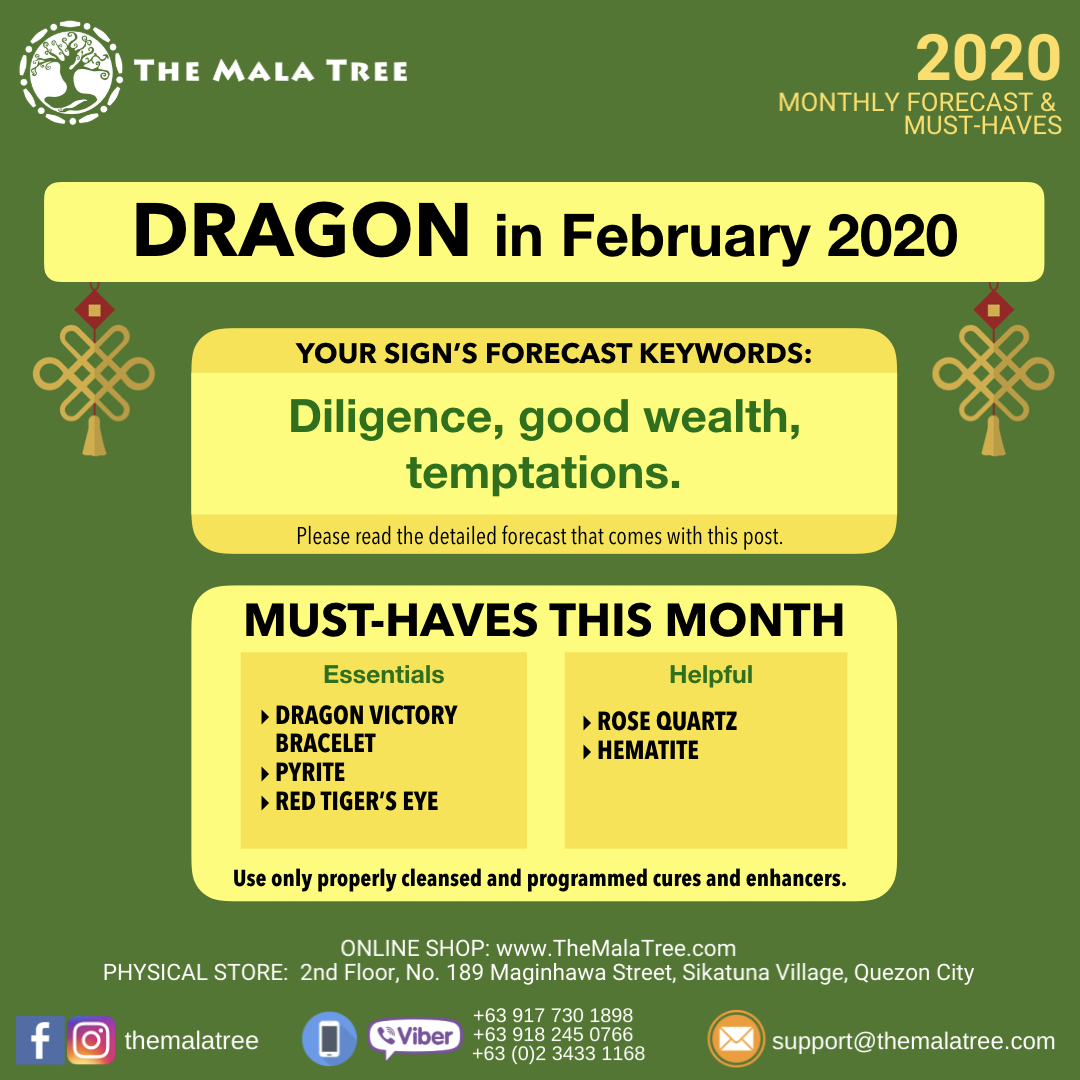 Take the good luck that comes for you this February as an opportunity to plan ahead. Prioritize your personal development and the broadening of your capacities. Moving forward is the only way. It is also a good time to make modest investments. Just be mindful of just taking only what you need. For Snakes in a relationship, it is good to talk about plans for marriage. 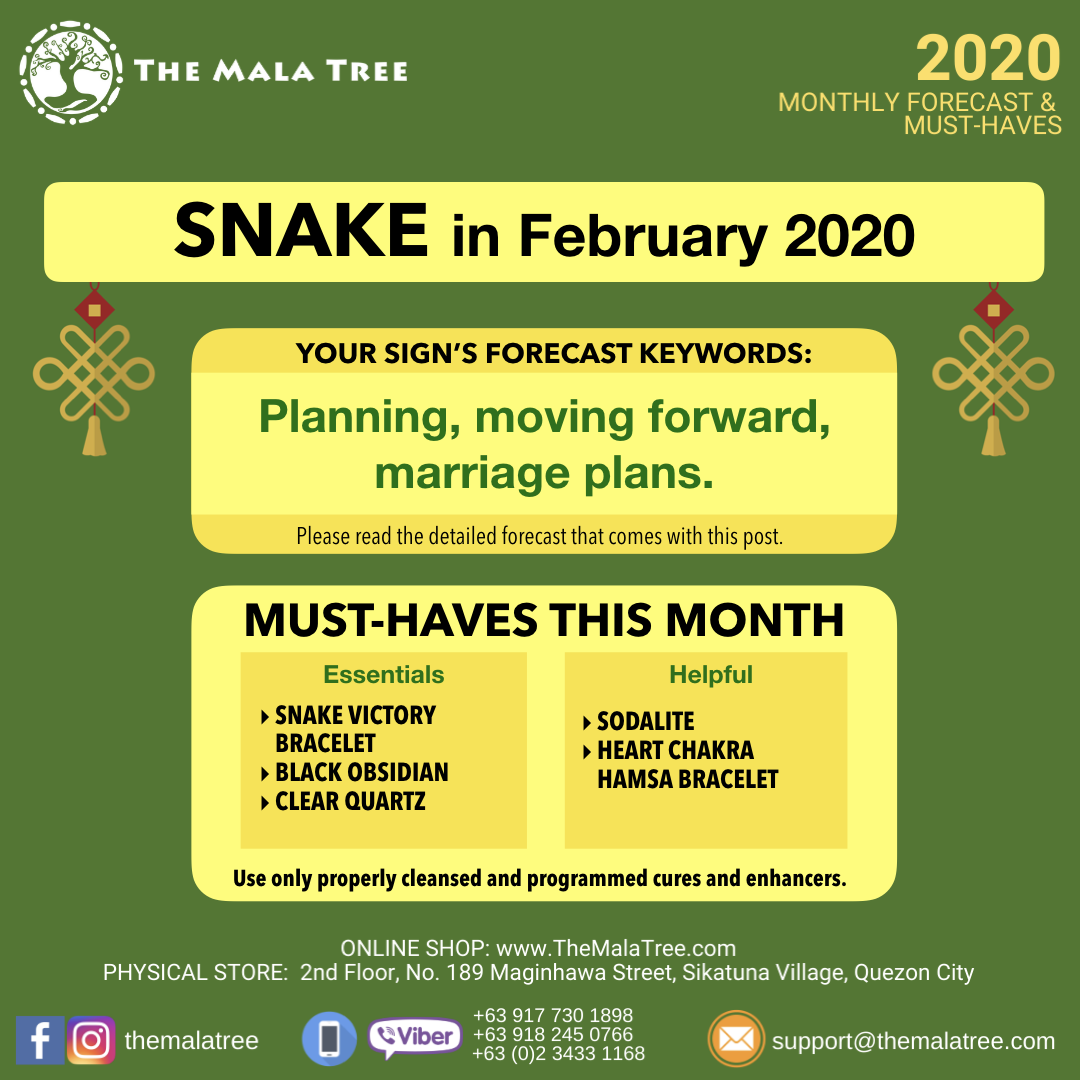 Horses should brace themselves to a significant luck decline this February. Keep your self together and your spirits up if ever you will receive criticisms from the higher up and even if your co-workers will not be supportive of you. Losses is the theme in terms of wealth. Be careful of your personal belongings. Business or investments might lose rather than gain and you might incur debt. You are also likely get caught up in an affair outside your relationship and wind up having a deep crisis. 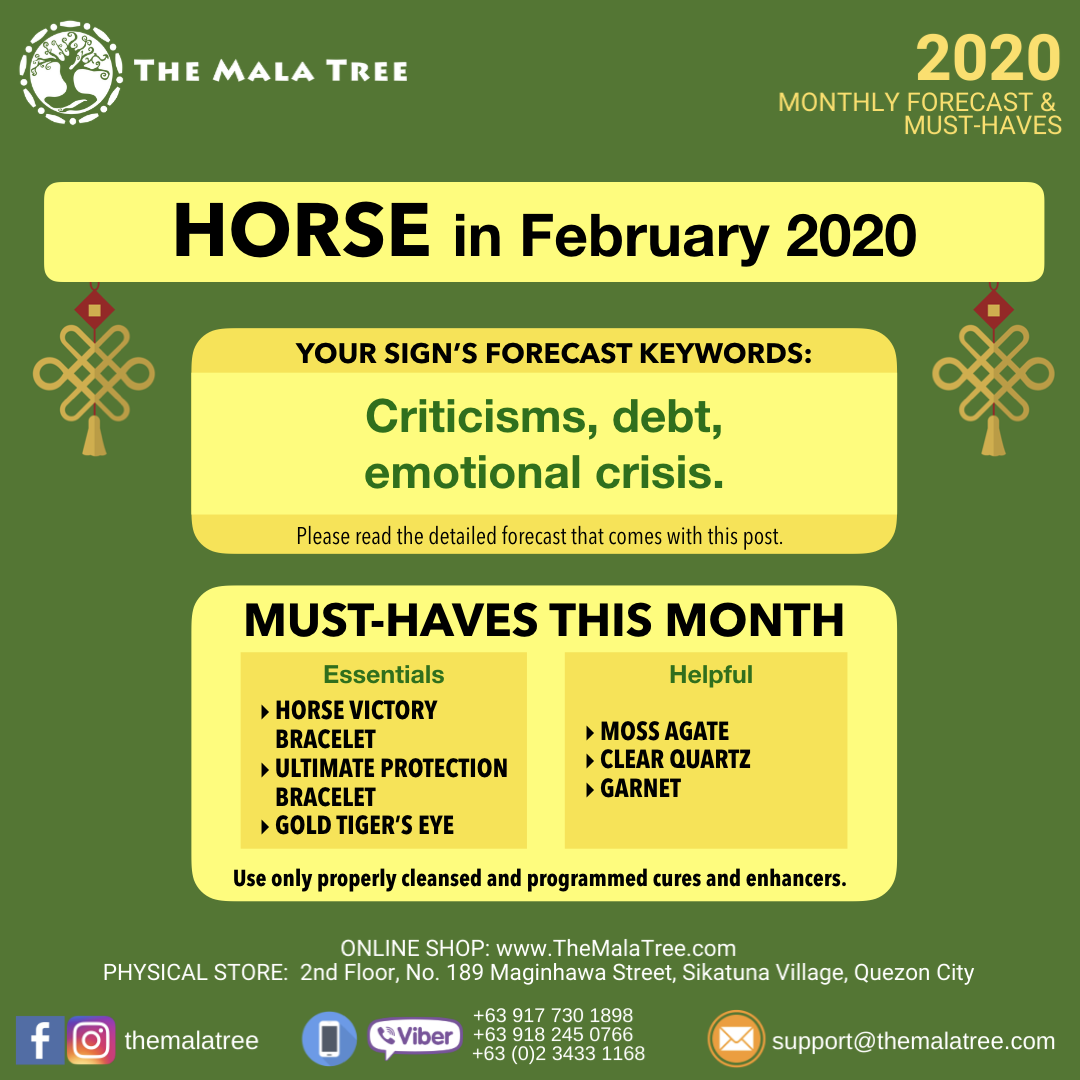 There will be more pressure in store for you in the office. Step up your efforts in improving on your workplace relationships and be wary of people that will put you down. Invest on making better at communication. You can invest on something if you like but make sure it’s only on lucky days of February. For health, be mindful if potential physical injuries. In particular, be very careful when riding a car. 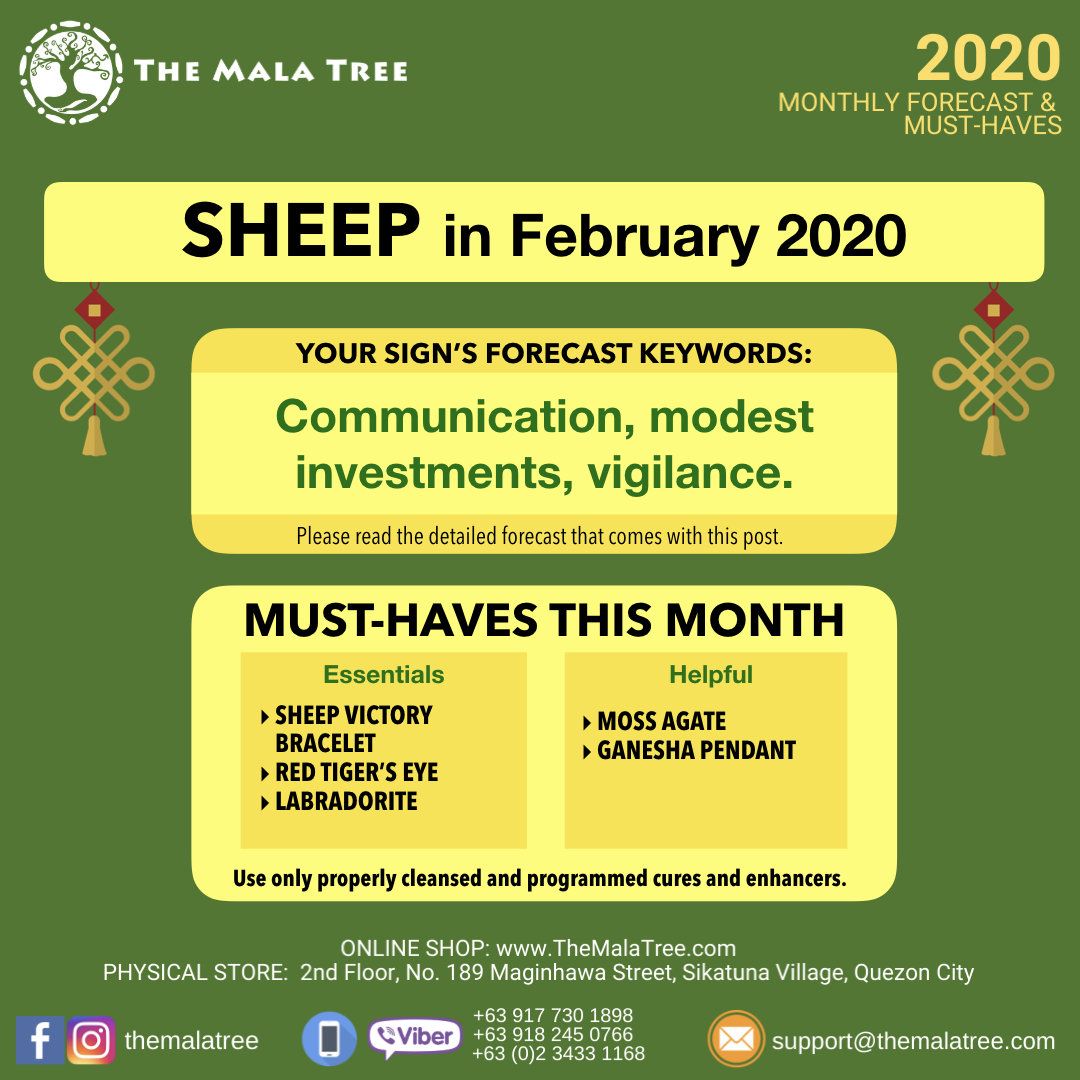 February will bring in a lot of support for the Monkey. It may be in the form of supportive colleagues or people willing to invest for you. Take good care of your interpersonal relationship with them. Avoid having misunderstandings or your fortune will reverse. Profits will be abound in business but it is not a good time for investments. You will be in good health. Getting regular exercise will reinforce this. 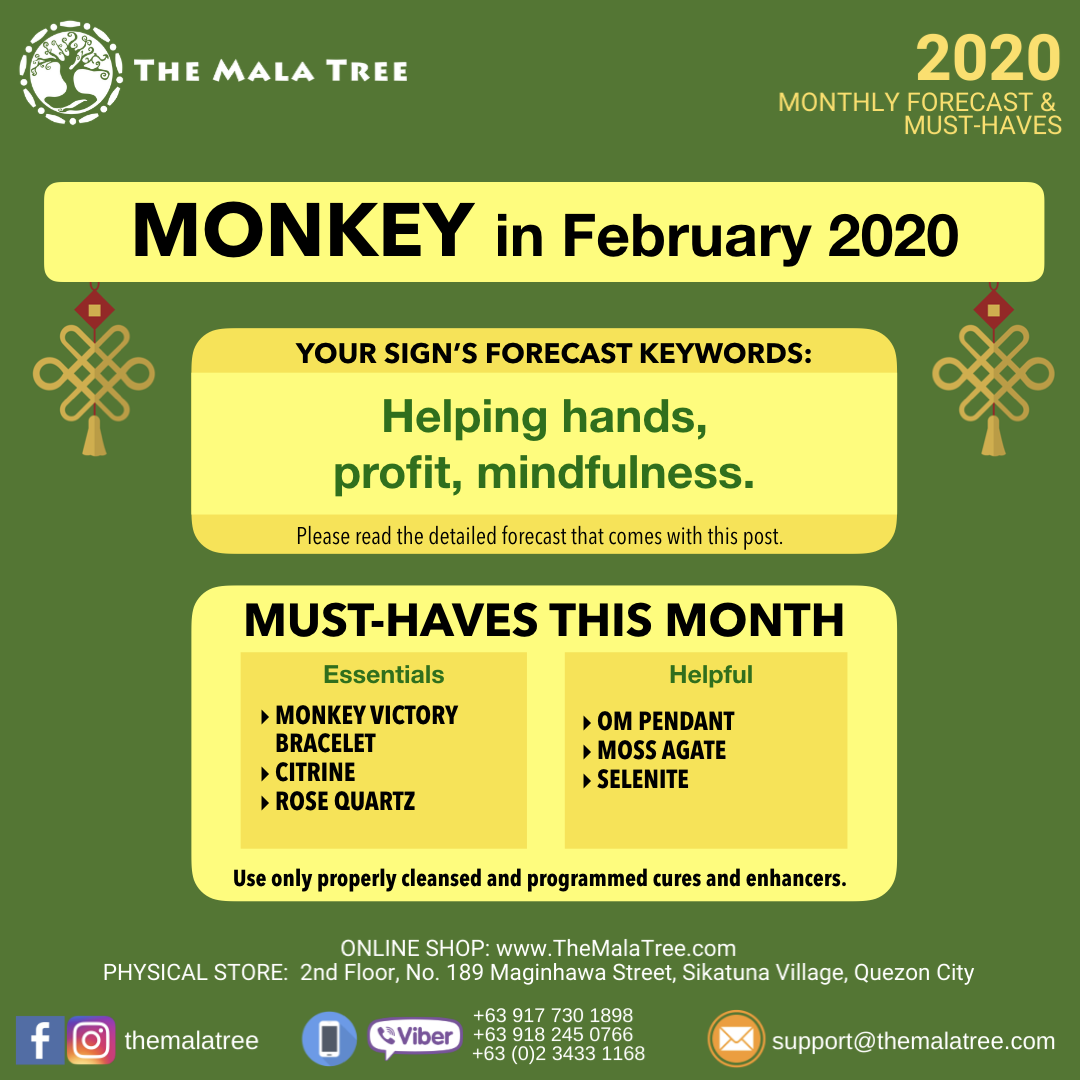 Expect surprises in your career this February. In other aspects, there is a moderate improvement of luck. Wealth will somehow improve and this is also a time for modest investments. It is a good time for singles to find the right one. For the committed ones, on the other hand, it is a time of temptation. Giving in might lead to a disaster. Eat healthy food. You will be prone to ailments related to the organs in the abdominal area. 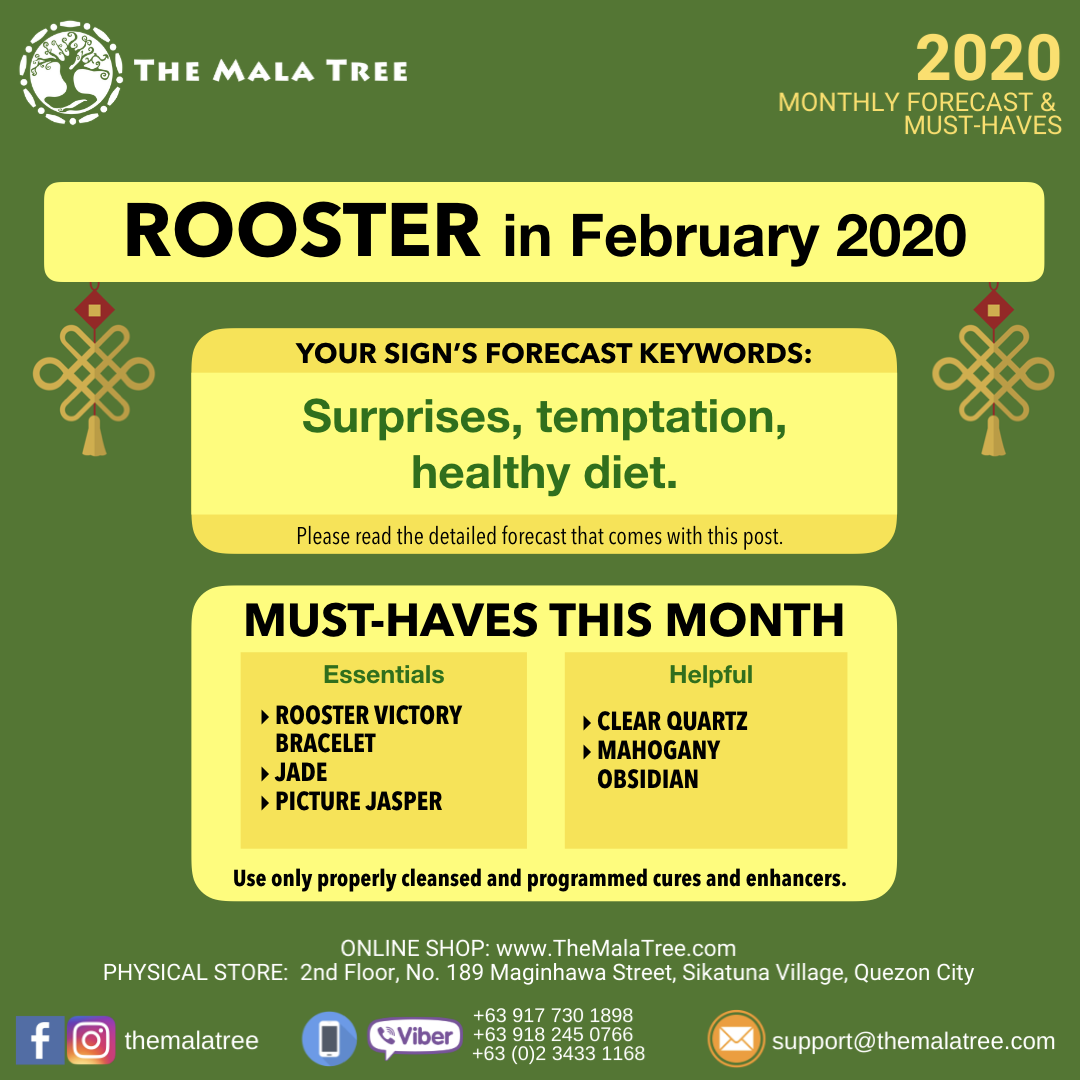 The coming of the new lunar year will be kind to Dogs. The positive energy you bring in the workplace will manifest into benefits. Your boss or co-workers will appreciate your effort. Better, you might be given a better pay or a promotion. As for romance, take this time as an opportunity to be better. Love, for the singles, will be just around the corner. Maybe from a colleague or a long-time friend. If that arrives, you need to take it into serious consideration. 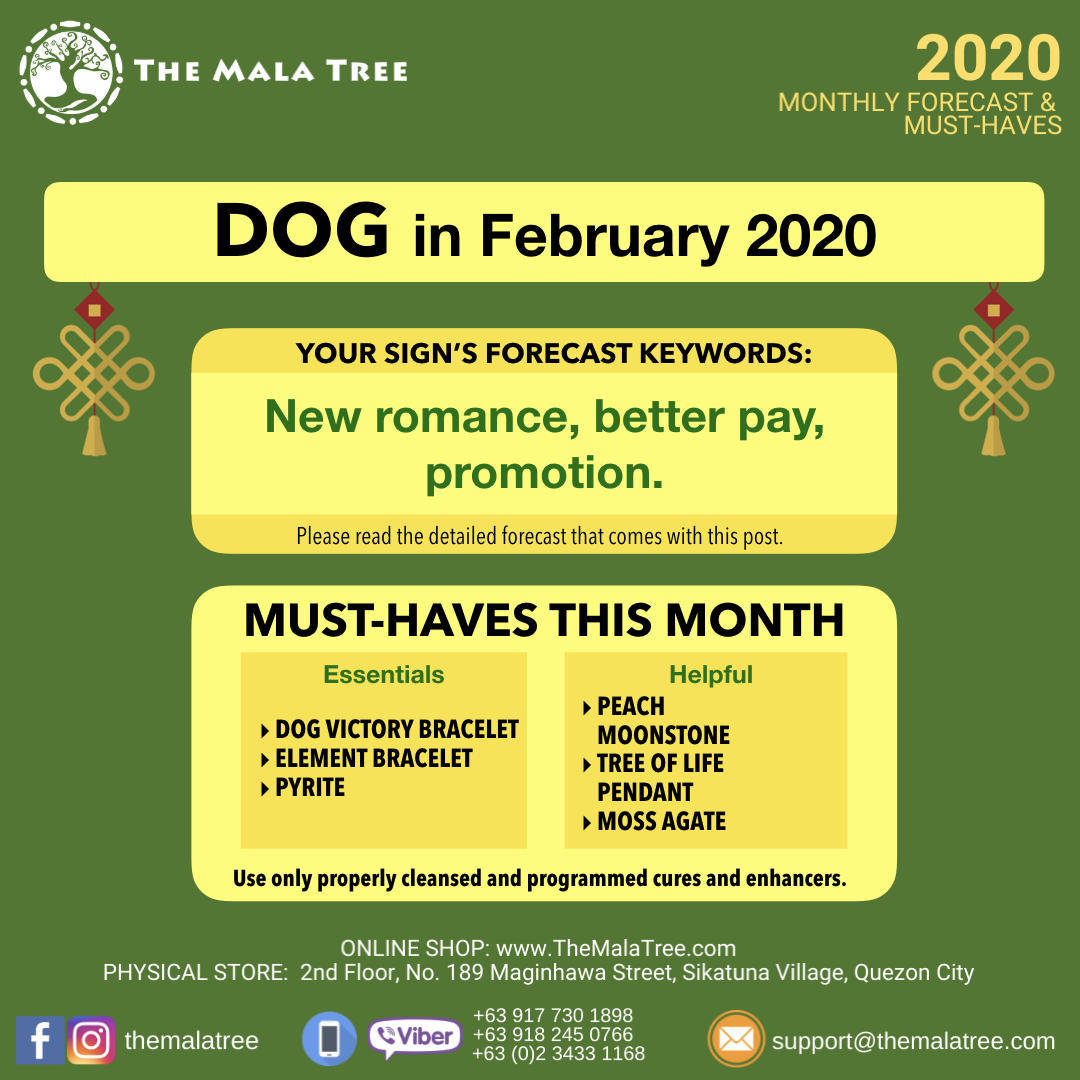 Pigs will have their boats rocked by their luck this February. This is especially related to your intimate relationship. You might enter a full cycle of falling out of love, breaking up, then making it up all over again. All this trouble will affect your family and friends as well. In terms of wealth, it is of course always good to share. However, be generous within your means. All the gifts and expenses will make a dent to your budget after the festivities. 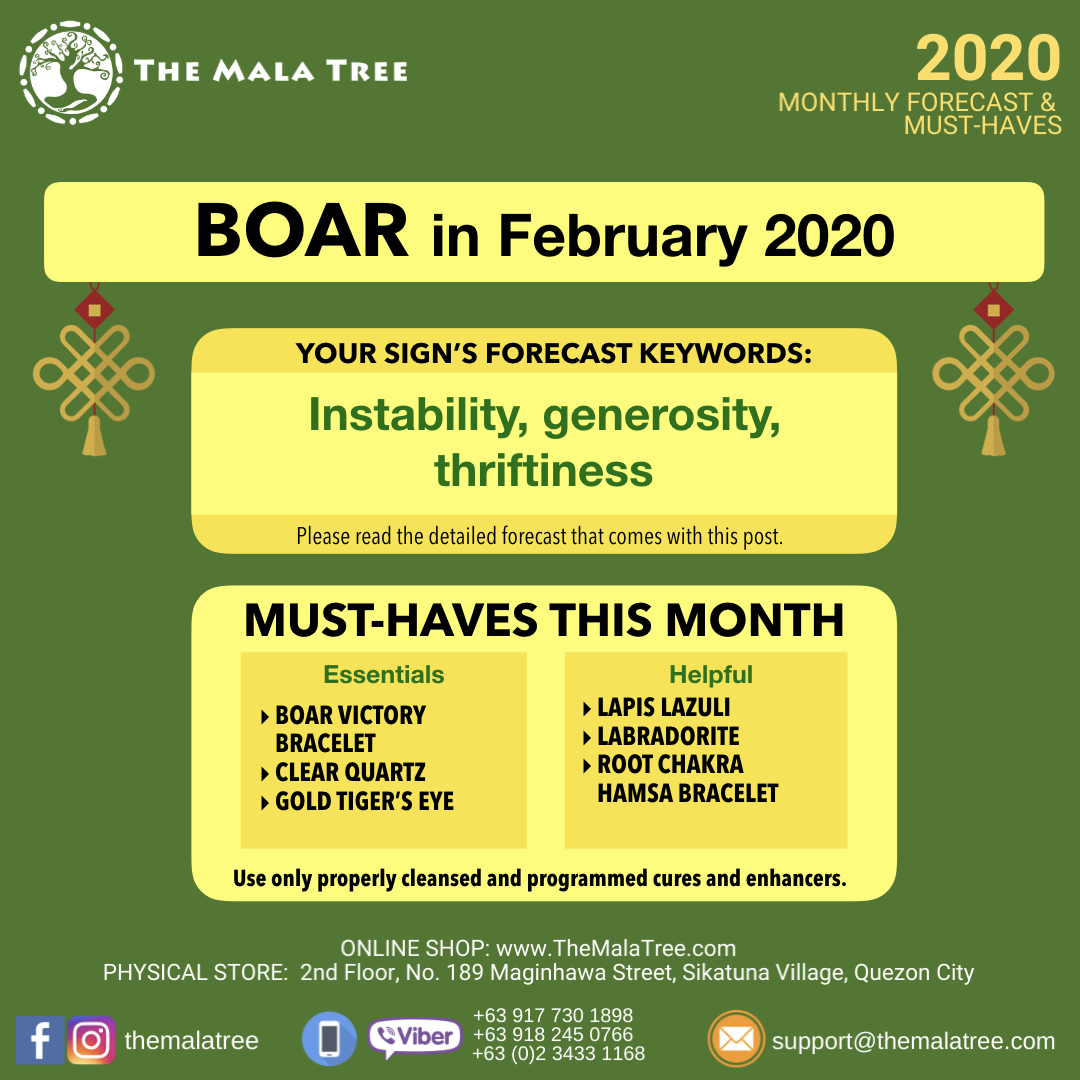